Today I continued my ILP and it was probably one of my favorite excursions yet! I was born and raised in Rapid City, SD and this summer I am exploring the places I have never been before or haven’t been in a very long time. This morning I took a ride on the City View Trolley and walked around downtown Rapid City. To be honest I walk around town quite often, but this morning I did so with the mindset of a vacationer and a head brimming with knowledge from the trolley narration. 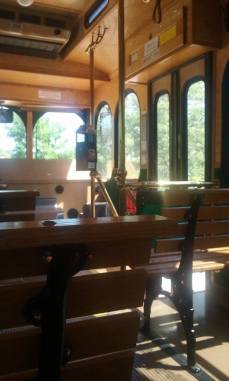 The trolley from my bench

At eleven o’clock this morning, I paid my fare and hopped on the City View trolley. The interior was wooden and air conditioned which made me smile as I found a seat. As we pulled away from the bus depot, a recording came over the speakers which continued the for an hour as I rode around town, learning about the buildings and parks I have always just passed without a second thought. I found my self pulling a pen out of my purse to take notes along the way because I was so fascinated by the history behind all these locations. I learned the railroad had a mega impact on the settlement of the town when the Chicago Railroad came through. Business was booming well before; gold was discovered in the 1870s bringing many to the hills and in 1889 the local mill was established. I was interested to learn it once ran by water power supplied by Rapid Creek, is the oldest business in Rapid City and at one time was one of the top four mills in America. These are just a few of the things I learned today.

Later I was thinking about how I saw these places and took in this information in comparison to tourists who have never seen them before and probably never will. Like, I never knew the street I take every day to get from my house to practically anywhere else was originally a railroad that transported people from town to fishing holes and gold mines. I also never knew I lived in what the Lakota refer to as the heart of the Earth or an area nicknamed “God’s Country”. To a random person from anywhere else, these are just facts to learn til the attraction they really want to go to is open. For me, they gave a foundation to the places I grew up on. 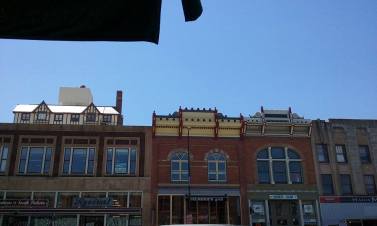 After I arrived back at the depot, my mind was swimming in all the history I had just learned so I decided to walk downtown with more than just ice cream or movies on my mind (my usual purpose in being there). Today I truly looked at the buildings and the way other people acted downtown as they took in their experiences. Here are some pictures from my adventure which I felt obligated to take as I played tourist!

Disclaimer: I tried, I really did, to take a selfie with a president but my Rapid City pride was just too strong, that was one thing I could not do 🙂 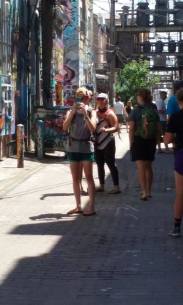 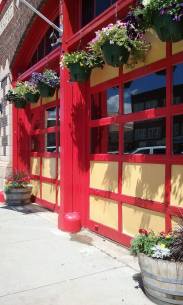 Garage doors to the 1915 firehouse (now a restaurant) 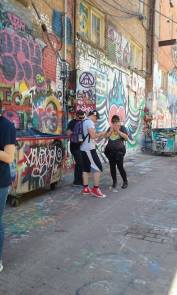 Maybe a town of history, but these folks prove we can keep up with the times as they hunt some Pokemon

9 thoughts on “A Ride Through Time”