I started the semester off with a wide range of books. I began four books, one of which I finished, one I gave up on and two I am still working on. George, the book I completed, was like nothing I’ve ever read before. Written by Alex Gino, it is a story about a child named George. George has an older brother who tends to ignores his younger sibling, a best friend named Kelly and cries in class when Charlotte dies in E.B. White’s classic tale. This sensitive personality often leads to bullying in school, but that isn’t George’s biggest conflict; you see, George is a girl. She is a girl in every way but physically. Gino offers a sympathy and realistic view of life for a transgender child. I have never really understood the concept of being transgender and this book explains it the simplest terms, after all, it’s told from the perspective of a fourth grader. I smiled at George’s experience as she shows the world she is really Melissa. A couple parts made me cry as well at her mom’s struggle to understand what George is telling her. I highly recommend George to anyone, literally anyone. 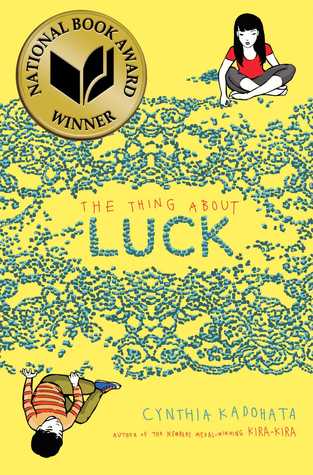 After George, I started The Thing About Luck by Cynthia Kadohata. I read the back of the book and the first chapter in the library before I checked it out and it seemed like a book I wouldn’t normally be drawn to, but I decided to give it a chance. I got about 100 pages in and I still just couldn’t get into the story, it wasn’t capturing me. So far a young Asian girl named Summer had traveled up the Midwest with her grandparents and older brother to help harvesters in several states. This is her family’s main source of income. Her grandpa is pretty quiet, Jaz, the brother, has social issues and Summer’s grandma believes in tradition and is very strict. The family Summer’s travels with is unforgivingly rude and Summer is not a happy narrator. I do not believe in spending time on a book you do not enjoy when you could be reading your next favorite book. So around Chapter Eight I put The Thing About Luck Down and picked up Bud, Not Buddy.

I am still working on Bud, Not Buddy and a series of short stories, Who Am I Without Him?. I have a hard time sticking to just one book at a time, so I tend to read up to seven at a time. Today I also started a Jerry Spinelli novel, but you can hear about that one next week!

12 thoughts on “It’s Monday! What Are You Reading?: Week One”